I started out as a vet nurse and wildlife carer, caring for many bird species. When I realised how specialised the care of raptors was, I decided I needed to know more. It quickly became obvious that no one cares for raptors better than falconers. I consumed knowledge and techniques shared by others so I could improve the quality of care for the raptors going through rehabilitation with me. 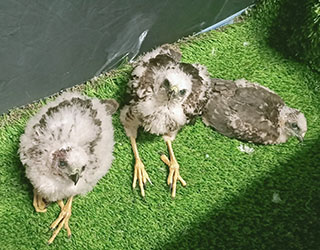 There are some very special cases that require falconry techniques and doing anything less would be an injustice to the bird. But falconry has also given me an important understanding of how to recognise those birds that do not have what it takes to survive in the harsh, wild environment. That is where the hard decision to end their suffering, before causing undue stress, is critical too.

A percentage of the birds we see come in as orphans or failed fledglings. These birds have no education to survive in the wild on their own. There are many lessons a young bird learns from its parents before dispersing away from the natal territory. These lessons include recognising their own species and environment, communication, predator avoidance, alarm calls from other species, weather conditions, everything that comes with flight including landing, using wind and thermals, soaring and very importantly, hunting. Using falconry in rehabilitation makes it possible for us to facilitate this learning while keeping the birds safe and fed.

When dynamic hunters like the Peregrine falcon come in as a single orphan, they require free flight exercise training by a qualified falconer. This is vital for them to build muscle and flight ability. The raptor is flown in an area where it has the opportunity to exhibit its natural behaviour and strategies to catch something to eat - always with the safety net of the falconer to return to at the end of the session. Once these birds prove that they can survive on their own in wild conditions, they are set free. All taming quickly reverses and the bird becomes wild again.

When we receive three or more chicks of the same species we have the opportunity to do a ‘wild hack’. During a wild hack the young chicks, which are often still covered in white down but old enough to pick up their own food, are placed in a purpose built box on a stand. The box is positioned and built in a way to protect the chicks from predators and harsh weather conditions, while still allowing them to be outside as if they were in a nest in a tree. The hack box has a door at the back for access and a drop-down door on the front to keep young birds safe, and let them out when they are ready developmentally. There is plenty of airflow through the shade cloth sides and large holes in the front door. The chicks have a balcony and perches to branch out onto, and plenty of room to jump and stretch their wings inside of the box. 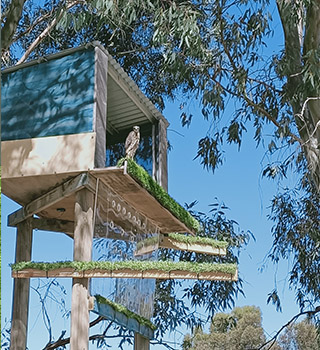 In November 2020 I was handed three Brown Goshawk chicks that came through the Raptor Fliers Association of Western Australia Inc. The chicks were approximately 4 weeks old and had lost their habitat. The two females and one male were all healthy and in perfect condition.

Every effort was taken not to imprint the chicks while they were in my close care. Handling them was kept to a minimum and they were never hand fed. They were kept away from human traffic and other animals. These are lessons learnt through falconry.

As soon as everything was prepared, the chicks were placed in the box. I would feed them through a chute in the back of the box and watch them with binoculars. They developed naturally and imprinted onto each other and their natural surroundings. After 9 days the male took his maiden flight, and his sisters followed a few days later.

During these early days they spent most of their time at the box sleeping, eating and playing. As time went on they spent more of their day exploring around the trees away from the box. I would hear the alarm calls from the other birds like magpies, galahs and willy wagtails, as the hawks made their way around the farm. 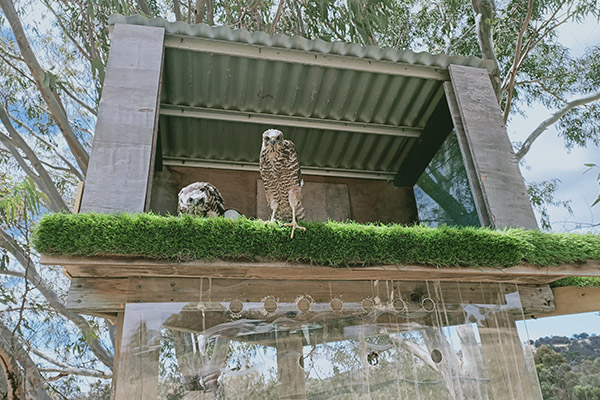 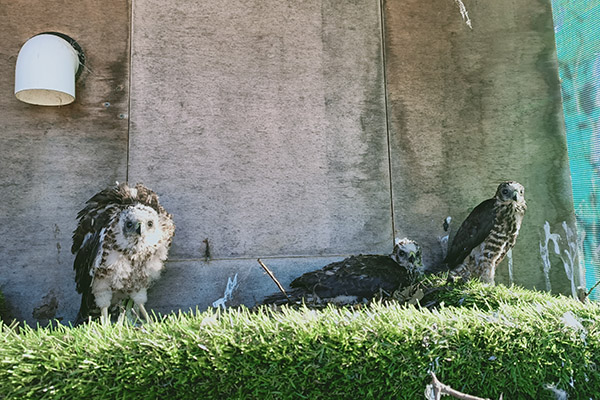 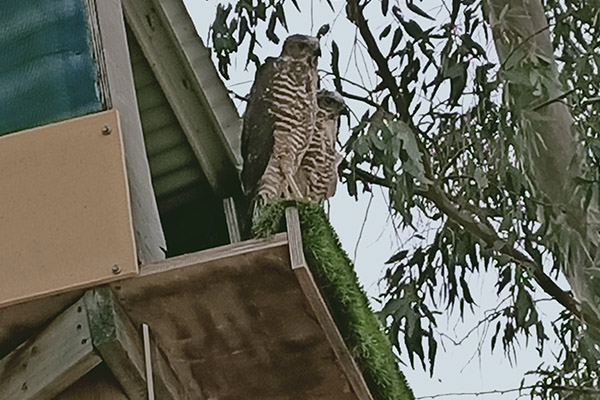 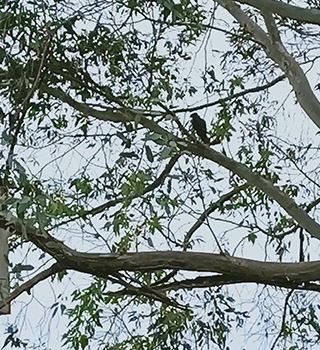 Each day they would return for meals provided and roosting at night. Their time away increased until they only returned to feed and leave again about 6 weeks after fledging. It was a wonderful experience watching them develop, learn the skills they needed, protect themselves from attacks and catch their own food.

Today is 2 months since they fledged. I saw one of the females fly out from the trees. She flew into a group of magpies undetected, grabbed one and returned to the bush with ravens and magpies calling behind her. Success!

These techniques have been perfected and shared by falconers around the world. Falconry and conservation go hand in hand. We care about the birds, the food they need to survive and the habitat they require.

The bird's welfare, keeping stress low and their feathers in perfect condition are our top priorities. Falconry has changed raptor rehabilitation for the better and I’m very grateful to be able to use these techniques for the best interest of the birds I work with.

Gina has been practicing falconry for three yeas and works with the Raptor Fliers Association of Western Australia Inc.