What has happened in the news?


On the 15th April 2020 Natural England granted licences for three falconers to take six peregrine falcons from the wild. Each applicant will take two chicks (one male and one female), to form a breeding project with the other applicants. Natural England states that these licences have been issued only on the basis of strict conservational and welfare conditions being met.

Natural England has given assurances that the welfare of these chicks will be closely monitored. The decision comes after careful consideration of evidence provided from scientific bodies responsible for monitoring raptor populations.

What this means for wild british peregrines:

Natural England's article on the decision

Applicants must present their expertise to demonstrate their suitability to be issued a licence.

They must also demonstrate that the welfare of any taken chicks will be appropriately provided for. Natural England plans to monitor the welfare of these chicks throughout.

The peregrine falcon currently has a conservation status of green, with range and numbers being at the highest since recording began back in the 1930s. In the 1970s there were a mere 47 breeding pairs in England, however by 2014 that number had increased to over 600 pairs. (ref Natural England, 2020)

eregrine numbers throughout a lot of the 19th century suffered due to persecution and a build up of the agricultural pesticide namely DDT, dieldrin and aldrin in the food chain.

Through the banning of these products and the adaption of peregrines to urban living areas the population has soared, with all historical nest sites now occupied resulting in falcons moving into our cities and taking advantage of artificial sites and buildings. 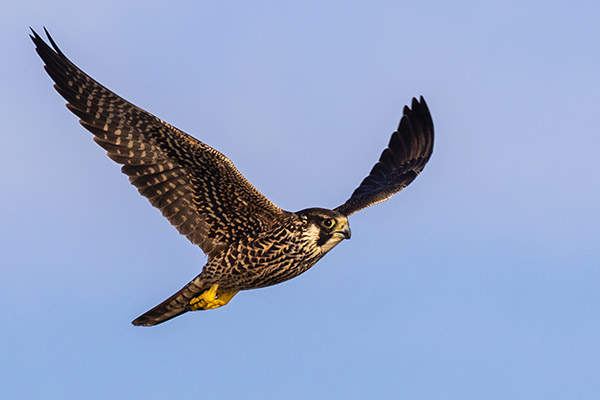 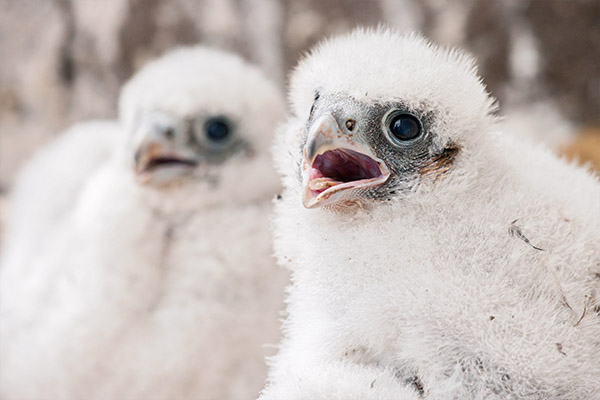 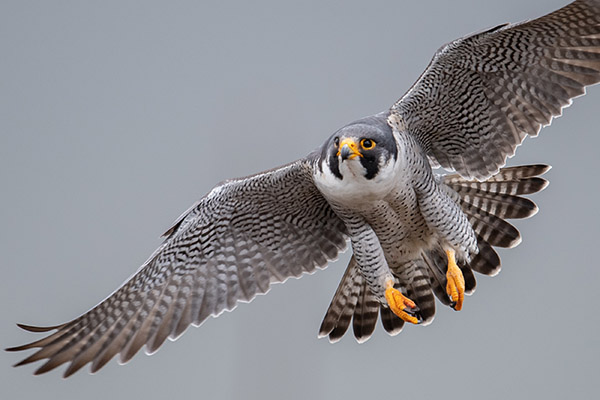 Detailed studies have shown that peregrine falcons typically lay 3-4 eggs. Statistically only half of chicks hatched are likely to survive into adulthood.

In every clutch there will be early competition for food, with the stronger and larger chicks out-competing their smaller and weaker siblings.

As such Natural England have specified that only the smallest and weakest chick can be taken. Therefore, only permitting the taking of a falcon that statistically is unlikely to survive.

The peregrine falcon has always been an iconic species - both for bird watchers and falconers. Traditionally falcons were trapped from the wild as immature birds called "passage falcons". The mortality rates of young birds can be as high as 75% in the wild. Many falcons fail to survive through accidents, lack of hunting skill, adverse weather and often just bad luck. 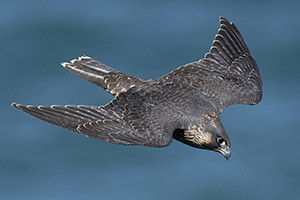 Falcons taken into captivity have the luxury of learning how to hunt whilst under the protection of the falconer. These birds would be allowed to perfect their skills over the following years, and ultimately would be released upon reaching breeding age. This process ensured the survival of that particular bird whom would have had less than a 25% chance of survival on its own is given a chance to contribute to the breeding population.

Following persecution and organophosphate pesticide use such as DDT, dieldrn and aldrin, the wild population crashed in the 1950s. Falconers were no longer able to take falcons from the wild, so instead falcons were imported from other countries where populations remained healthy. The limited availability of peregrine falcons resulted in some falconers developing breeding projects, where pioneering techniques were developed which allowed falconers to become self-sustainable with falcons for falconry. These skills became a crucial part for many raptor conservation projects.

Techniques pioneered by falconers were used in the breeding and release of peregrine falcons after the peregrine was declared extinct in the Eastern United States. This continues even today with species such as the Mauritius kestrel, orange breasted falcon and many vulture species worldwide.

There currently is no need for peregrine falcons to be released into the wild, as populations are high enough and continue to expand. However, should another ecological disaster occur such as DDT, we have no guaranteed populations within captivity of British peregrinus peregrinus that could be used to repopulate after a population crash.

Wild falcons often come into captivity through injuries and are cared for by falconers. Those that are unable to be released provide some resource for "pure" genetics, however wild disabled falcons are notoriously difficult to breed, and therefore not a guaranteed way to support future conservation breeding projects. By starting afresh now with a small number of falcons while wild populations are healthy - a pedigree of pure British falcons can be made with guaranteed "pure" genetics for future conservational use if ever required.

The art of falconry is thought to be 4000 years old, with its traditions passed from generation to generation. As such falconry is recognised by UNESCO as an Intangible Cultural Heritage.

We have compiled a list of just some of the amazing charities and organisations who work hard to actively protect and preserve raptors across the globe. We encourage you to explore further and find out about amazing conservation that is already taking place.

Explore the history of falconers and conservation:     Learn More