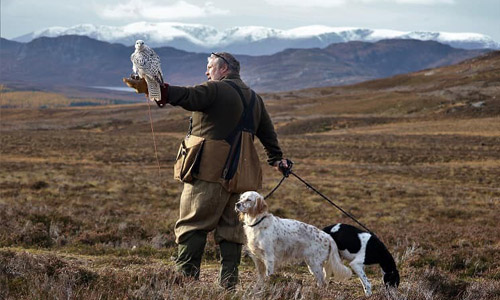 One of the most important parts of our ethos from the start was to allow everyone to have a voice, and to get people to work together. We wanted this to be a project set up by the falconry community for the falconry community. The new project and initial focus group were advertised on social media pages with an open invite for falconers to join in. Around 90 falconers signed up to get involved.

Following the success of the focus group, it was then decided a committee should be formed with specific duties and rolls to keep AFWF continually moving forward and growing. It was particularly important that this committee was elected democratically and open for anyone to apply for.

A meeting was arranged in the Midlands, again with an open invite for falconers to attend, which was widely published on social media. Attendees were encouraged to invite others who shared an interest too.

The meeting was well attended with around 50 participants – with representatives from the Hawk Board, British Falconers Club (including the director), International Association of Falconry, Female Falconers Club and Welsh Hawking Club. Also in attendance were individual falconers, people from the pest control industry, commercial bird of prey/zoo industry and several veterinary surgeons with a key interest in raptors.

After introductions by everyone attending, the meeting started with the committee applicants being read out. Those who applied to stand were then voted in by all who attended the meeting. Following the election everyone was invited to discuss and give input for the future of AFWF, and after several hours of discussion AFWF’s goals were formed.

Since the inaugural meeting the committee has set up a website and social media pages. We have grown a solid following on social media and have connected with tens of thousands of people each month since we began. We have been releasing regular, free to access content about many different aspects of falconry and birds of prey.

We continue to strive to educate, promote and preserve the future of falconry...

A team of passionate falconry advocates... 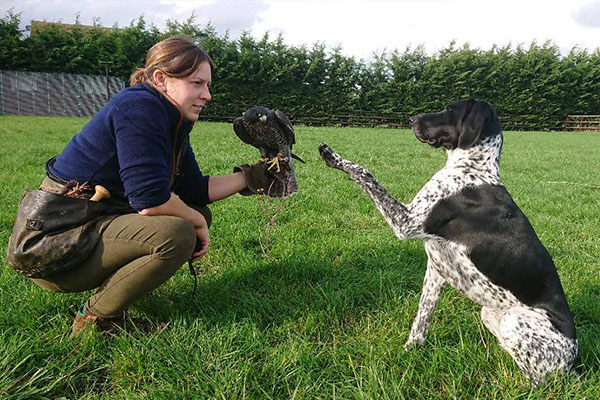 Amy is a passionate advocate for women in fieldsports, and is one of the founders of the Female Falconers Club. She is also part of the International Association for Falconry Womens' Working Group.

She works hard to promote the art of falconry, and to educate the general public about birds of prey, their conservation and how falconers' impact make a vital difference to their survival.

Falconry has taken over her life for the past 15 years. Her personal focus is in hunting with falcons and hawks, alongside her German shorthaired pointer. 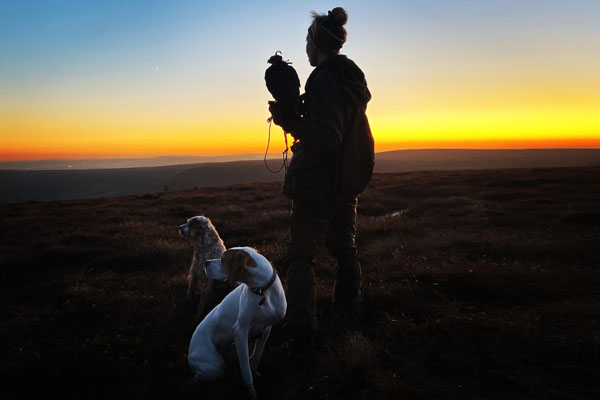 Gemma has worked with birds of prey for the past 15 years in a variety of settings, including aviculture, zoological collections, and rehabilitation.

She is an avid falconer whose passion lies with flying her homebred peregrine falcon over her team of pointing dogs. She has an active role in a number of falconry clubs; was co-founder of the Female Falconers Club and treasurer for her regional British Falconers Club.

With a degree in Bioveterinary Science, Gemma has a keen interest in bird of prey health and welfare. She is involved in research within areas of welfare and spoke on welfare issues on behalf of the International Association for Falconry at the congress on illegal trade in birds of prey in Abu Dhabi. 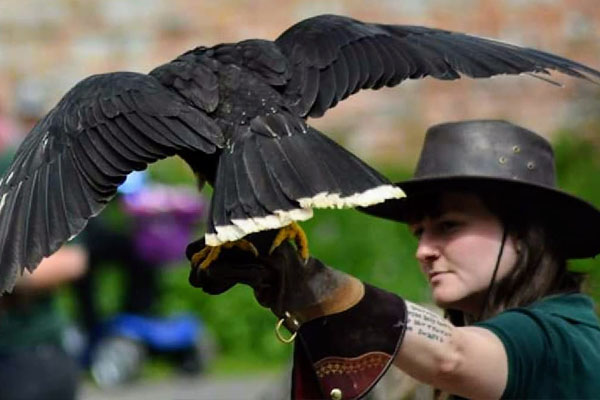 Hannah started in falconry by working at a bird of prey centre doing flying displays and educational talks.

She now splits her time between the aforementioned centre, working for a conservation charity, running her falconry furniture business and of course spending as much time in the field as possible with her own birds. 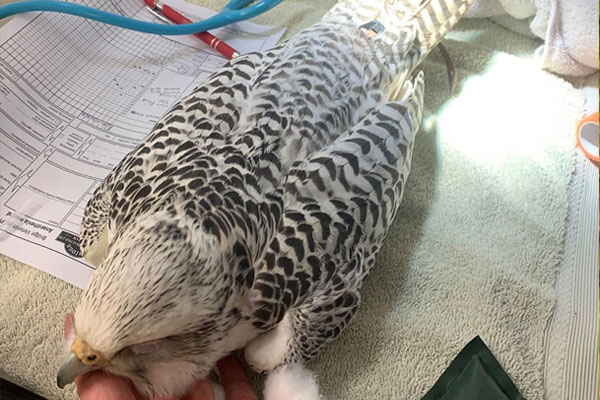 Lloyd has worked as a vet since 2014, after graduating from vet school and completing an externship at the Abu Dhabi Falcon Hospital. He is now completing his Certificate in Advanced Veterinary Practice to become a recognised specialist.

Having been involved with birds of prey, from both a falconry and wildlife rehabilitation aspect for the last 13 years, Lloyd has always been passionate about the welfare of birds of prey. Working within the committee of AFWF is a fantastic opportunity to help educate and engage with falconers across the globe; promoting the best of falconry and the best for animal welfare. 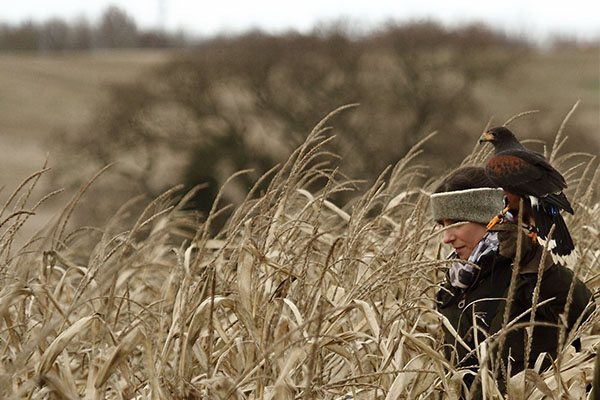 Amy has been involved with birds for over 5 years. She started by volunteering with a local display team before moving on to the National Centre for Birds of Prey where she is now a weekend volunteer. She recently made the step into the hunting with birds of prey, and was lucky to have a harris hawk on loan from the NCBP.

After some success with him, she is currently awaiting the arrival of her own harris hawk. She is passionate about engaging with the public and educating others about birds of prey and falconry in general. She hopes to help sew the seeds for future falconers, educators and conservationists alike. 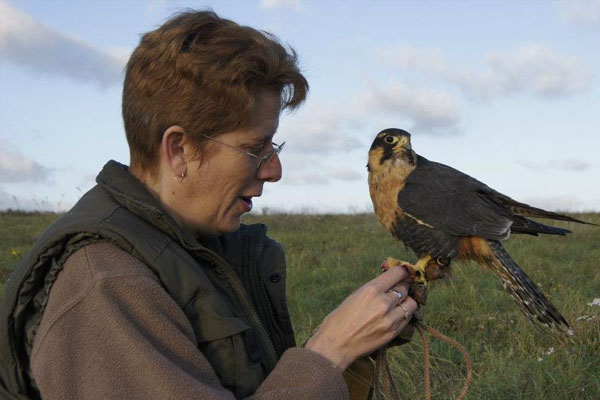 Mitchell's interest in raptors took hold early, and he has been involved in flying birds of prey from 6 years old. He spent many years working in bird of prey centres, training birds and engaging the public on experience days.

Mitchell is now flying full time in commercial pest control with a team of hawks and falcons, while hunting winter long with home bred peregrines. His drive and passion to see falconry continue is hard to beat.

He is a great supporter of the UK falconry clubs, and helps to run one region of a national club. 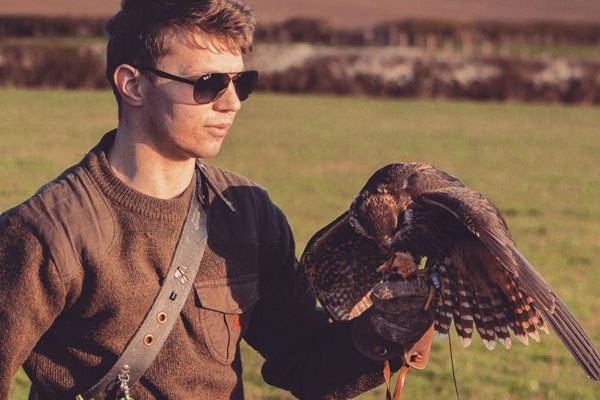 Dan started working with birds as his first job, after finishing school. While studying animal science at college he worked with a local falconer flying birds for displays throughout the summers and using the birds for pest control throughout the winters. Dan then went on to work in falconry centres such as the National Centre for Birds of Prey, doing displays and experiences with a wide variety of birds.

Combining knowledge from his studies with a traditional falconry approach, Dan now has his own team of birds and is proudly involved with the British Falconry and Raptor Fair. Dan also uses his birds as subjects for his artwork. Dan believes falconry plays a large role in the conservation of raptors and therefore thinks it is very important to educate the public to create a long lasting positive future within falconry.


Support our work and make an impact

Help us to share the vital impact falconry has on birds of prey, and the world around us.