Mythbusting and The Ethics of Working with Raptors 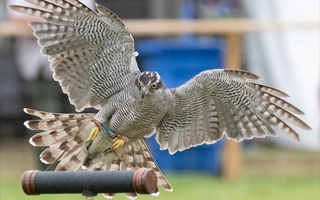 For anyone working with animals there will come a time when one has to deal with people who share different values than your own. This can be challenging to deal with, particularly in the internet age where facts are considered to be true by virtue of being posted on social media.

That's not to say we shouldn't question what we do or how we treat animals, because we most certainly should. But we have to remember there is a difference between 'opinion' and 'scientific fact' - a distinction that some animal rights groups frequently ignore to further their own agenda. Everyone has the right to an opinion, and everyone has a right to express that opinion - the problem arises when that opinion is presented as 'fact'.

Humans have been linked to animals since we first walked the earth and that isn't going to change in our lifetime, if it will ever change at all. We use them for food, clothing, to help us work, to study, and for the joy of companionship. They are woven into our lives so completely that it is near impossible to separate them. Some believe we should separate ourselves completely, but they are forgetting that animals actually take advantage of us humans just as much as we do to them. They are smart, resourceful, and unapologetic in their pursuit of an easier life. Life in the wild is tough and humans present opportunities to aid survival whether we intended to or not.

Falconry is a partnership that has endured for 1000s of years due to the opportunistic nature of carnivores. Birds of prey very quickly see an advantage to the association with humans, but the methods of persuasion can be confusing to those with little knowledge of predator behaviour. Added to the fact that, like many industries, there are those who seek to make a quick profit with no regards to welfare; it is no wonder there are many misconceptions surrounding keeping birds of prey.

Birds Are Not Starved 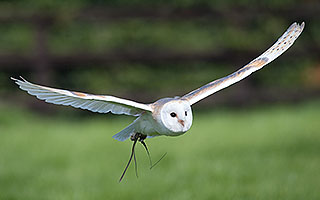 Hunger and starvation have two very different meanings, but people use them interchangeably without understanding their definition.

Like all predators, birds of prey are capable of eating far more than their actual nutritional demands for one day. They will store the excess as fat to be used later.

Genetically programmed to conserve energy, a hawk kept in an aviary and fed too much will not burn off the extra fat since it will have no desire to move, therefore it will succumb to all the usual health problems associated with obesity. 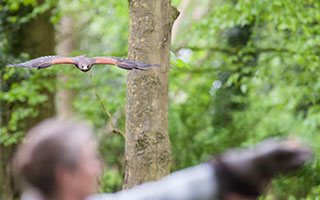 When conditioning a bird of prey for free flight or hunting we manage the food intake so the bird is motivated to fly but also fit enough to do so. Most captive animals, and indeed many humans (athletes for example) have a controlled diet otherwise they become overweight and unhealthy. Birds of prey are elite athletes and their weight, nutrition, and behaviour are obsessively monitored by their keeper to facilitate their natural abilities and ensure their health.

Weight management and positive reinforcement with food is used worldwide in the rehabilitation of injured wild birds of prey prior to release, and is very successful.

If such methods were deemed cruel and outdated they would not be used in this manner.

Birds Are Not Made to Perform Tricks 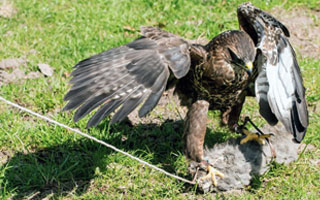 Birds of prey understand neither coercion nor punishment. A hawk cannot be made to do anything that it does not want to do. Try it and you will bleed. There is a reason why most of the owls in Harry Potter are CGI - they are never going to deliver your mail for you.

When it comes to public displays the aim is to replicate behaviours that a bird would perform in the wild in pursuit of a meal. We cannot erect a forest in an arena to demonstrate the tight spaces that a hawk will fly through, but we can recreate a scenario with other obstacles. We cannot use a live pigeon for a falcon to chase, but we can use feathers tied to a line swung at speed (known as a lure). Are these tricks? Or rather a safe demonstration of behaviours that the public would find difficult to see in the wild. 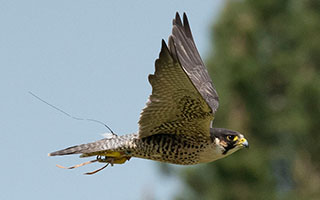 A common argument is that zoos do not educate the public and do not contribute to conserving species. No picture or phone app can replicate the feeling of having a falcon swoop past your head, or the clarity of her piercing eyes. We want people to care about these magnificent birds and their conservation in the wild. Meeting captive bred birds of prey connects the general public to the plight of their wild counterparts, and helps protect their future.

Techniques learned from falconry have saved countless species that were on the brink of extinction, and continue to do so. But it is also extremely expensive, and relies on public support. 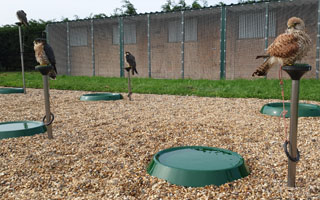 Tethering is an emotive topic, and the first question that springs to mind is why do we find it acceptable for some species to be tethered and not others? A dog wears a collar around its neck, a horse has a bit placed in its mouth, harnesses are used to walk alpacas, skunks, and even reptiles. People have no moral objection to these practices but the idea of restricting flight is abhorrent to us because of our romantic view of what flying is. The reality for birds of prey is that flying is not recreational, it is necessary for survival. If a wild bird has no energy to hunt it will starve.

When used correctly tethering is an essential and safe management tool. It allows birds to be safely moved to different locations, to provide visual enrichment, and to allow the falconer to monitor the birds behaviour closely. Reading a hawk's body language is one of the most important aspects that we must learn. It's why falconry is called an 'art' - you don't learn it from a book, but from practical experience. 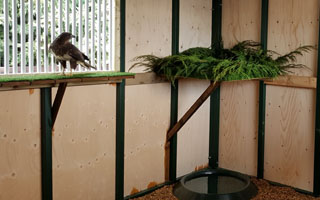 Individual falconers who hunt allow their birds to rest and moult new feathers in an aviary (or mews as we call it) outside of the hunting season. For commercial centres, licencing requires that display birds have similar time off and are not permanently tethered. Reputable centres adhere to this, which is why you will always see a mixture of tethered birds and aviaries, as the birds are rotated and rested.

Individuals masquerading as 'rescues' in shopping centres with poor equipment and stressed owls set a bad example that we do not condone. But to advocate a ban of a process that is both safe and legal, because a select few choose to abuse the method, is both short-sighted and detrimental to the health of all raptors managed in captivity. 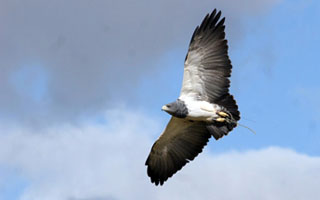 Good keepers and falconers are happy to answer questions from the public - we have nothing to hide. Far more than a job or a hobby, it is a way of life, an unwavering passion, and respect for a creature who chooses to share its life with us.

It is important to form educated opinions in all aspects of our lives. Exotic animal husbandry is complex, and those involved spend many years learning, researching and developing the way they work with their animals. Leave the 'fake News' on social media and seek your own answers.

To discover more about falconry and its work with conservation,
why not follow one of the links below: