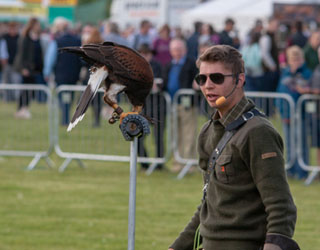 When the public think of falconry they likely think of someone who flies a falcon, as simply as that. From my own experience, when people find out I am a falconer, hunting is not an obvious or immediate topic of questions. I am not saying the public are unaware we hunt - if they ask enough questions they eventually seem to get to "and do they hunt?"

I suspect the reasoning behind this is due to bird of prey flying displays. Displays at fairs and events is often the only experience the public will ever have with regards to ‘falconry’. Therefore, bird of prey display businesses, myself included, have a responsibility to educate the wider public about falconry.

Before we start using falconry to educate, I believe it is important to think about how falconry has taught us. On a small scale falconry teaches us patience; nobody can force a hawk to do anything with good results. It teaches us self-discipline. To successfully train a hawk we must be persistent and methodical, we cant just go out and fly a bird for fun when we are a bit bored. It teaches us fine crafts. Falconry has created some of the finest leather crafters, wood and metal workers, and incredible artists. It teaches us the ability to read the behavior of the land, understanding and appreciating the countryside and the wildlife, both predators and prey, that inhabit it.

On a larger scale, falconry has spread knowledge to a wide array of people and professions. Keeping and working so closely with raptors for thousands of years has built a foundational understanding of behavior and anatomy of birds of prey. This has helped both veterinary and rehabilitative care of both captive and wild birds of prey. Falconry also aids in veterinary research, advancing all aspects including diets, habitat and breeding conditions, and common diseases/illnesses. This allows veterinarians to better treat wild birds of prey. Similarly, falconry aids in wildlife rehabilitation. An injured wild hawk will have little chance of survival if released after recovering in an aviary. She will not pass the cruel tests of fitness and survival after weeks or months cooped up losing condition. Falconry has taught us how to exercise and build physical tone meaning the rehabilitated hawk has a much better chance of survival after being released. 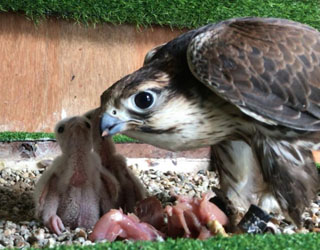 Falconers are on the front line of some of the most important raptor conservation organizations, utilizing falconry techniques and knowledge for successful breeding and release programs of endangered bird species. Successful programs include Mauritius kestrels, bald eagles, and the California condor, and more recent efforts have turned to the vulture crisis, and lugger falcons, all using knowledge gained through falconry.

The conservation efforts that use what we have learnt through falconry spreads wider than just birds of prey. Falconry has perfected hunting into a science. Falconry is more than just using a hawk to hunt everything it comes across. Falconers must manage the wider environment that they hunt in as well as the prey species that inhabit it, in order to encourage healthy future populations to remain established. This feeds into the wider ecosystem; aiding the management of plant life on the land encourages further flora and fauna to exist. This in turn provides more food for wild predatory animals too. The presence of responsible and knowledgeable falconers creates a healthier countryside.

Back to using falconry as an educator, I have been doing displays for my entire working life and I have seen how my own idea of a good display has evolved. When I was first introduced to bird of prey displays the focus was all about entertaining, telling people about their specific birds rather than the species, and getting people involved in the display. While this style of display is certainly a crowd pleaser, there was no deeper message conveyed. The public would leave happy, but they hadn’t really learnt anything. I now believe strongly that the purpose of falconry displays is to educate. Of course, the display can still be entertaining but I think the best displays educate people about falconry and conservation, without the public realizing they are being educated. 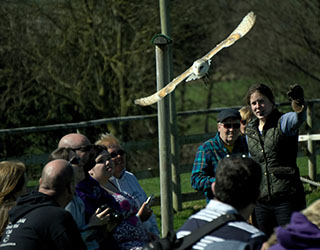 I have said and written before that people are simply not going to support something they do not care about. The best display falconers get people to care, while educating them. I used to think people just needed to get up close and personal to care about the birds. I now know that if the birds show off their amazing natural flying abilities, the public will be really entertained and interested. Then it’s down to the display falconer to provide the educational message during the ariel display to link up what the public are seeing and how it is relevant to conserving our wild birds of prey.

Using falconry techniques to train birds of prey and then using these trained birds in flying displays to educate the public sends more attention to the conservation organisations who help promote falconry and wild raptor conservation in a positive light. This in my opinion is one of the most effective ways to use falconry for education.

Probably the most obvious way to use falconry for education is school visits (and other similar groups like Cubs and Brownies). By educating children and getting them excited about falconry and raptors in general, we ensure a future generation of people that support falconry and its wider aims. If you start asking conservationists, wildlife rehabilitators, and even vets, what made them pick that profession, it would not take long before you find the common theme of it being something to do with a childhood interaction. 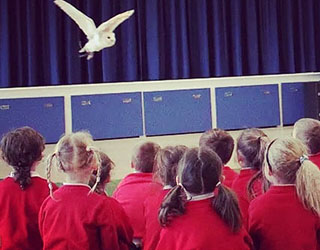 There is an endless number of ways you can achieve this with a school visit. Falconry can be an amazing and unique tool for applied learning. The subjects that easily fit into a falconry education session are predominantly science and history. Using the birds to teach children about food chains, nocturnal animals, taxonomy, ecosystems, and all other matters of biology supports lessons in science. And teaching about medieval social hierarchies and the use of peregrines in the war supports lessons in history. The interesting part is how you use falconry to educate in other subjects too, such as maths and English. Falconry can make maths fun; getting the children to assist in weighing the bird is a powerful educational tool. It’s engaging while teaching a fundamental falconry training technique, weight management. The bird can be flown with the students and then weighed again afterwards. Flying a bird of prey is a fantastic opportunity for the students and weighing the bird before and after turns it into an interesting investigation applying maths and science skills. The students can use maths to work out the change in weight, simple subtraction for younger ages going up to working out percentages for older ages. With one simple exercise, you have made maths fun, taught an important aspect of falconry, and potentially set several children on the path of supporting falconry for the rest of their life. 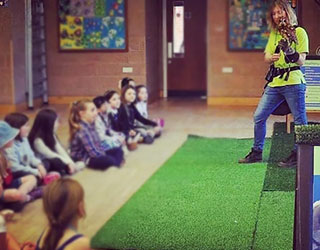 Lessons can be taught while flying birds too. The task can be as simple as getting students to measure the distance between two perches, and then use a stopwatch to time the bird flying from one to the other. This can be used to calculate the bird’s speed and without even realising it, you are using falconry to teach physics. Afterwards the students can write up what they have learnt and done during the day. Providing you have been using the correct langue and explanations throughout the day, the students can use the correct words in their writing.

I think it is essential to preserve the unique language of falconry and like with the maths example, this makes both falconry and English language fun and engaging. It is likely something they will remember for many years to come.

Overall it is important to educate the general public on falconry and its many purposes as much as we can. As display falconers we have first-hand access to help promote and educate in a far reaching and passionate way. It is just as important to use falconry to educate children, because they quite literally are the future of both falconry and the conservation of our wild birds of prey.