Falconry In A Testing Landscape 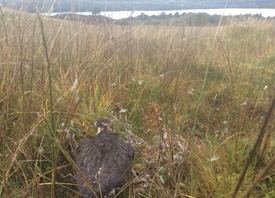 Based in rural Argyll on an area of hunting land - around 11,000 acres of tough high hill land - we deal with the typical Scottish weather of rain, rain and more rain.

The decision was taken early on when forming Kintail Birds of Prey, that with the land and weather we have, it would be best to specialise in native species. From the display flying / falconry experiences we host (mainly for tourists visiting Scotland), and with regard to hunting the quarry that can survive the tough life up here with such barren land, it made sense to work with native breeds. 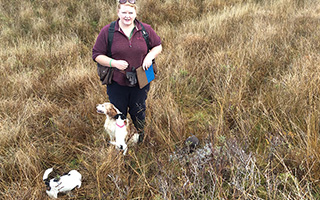 Falconry under these conditions, where the predominate species are tooth and claw means adaptions have to be made. Our birds have to be super fit and need to wait on (circle above the falconer) directly overhead without drifting off elsewhere. After a successful flight, the dogs are sent to point the falcon and prey in the hope of keeping eagles at bay until we get to them. It is not uncommon to have multiple sea eagles and golden eagles in the air above them.

In fact seven sea eagles is the most I've seen at any one time. The top section of the estate acts like a corridor where all the young and adolescent sea eagles hang about, just being generally disruptive until they reach maturity and start to look for new territories. These are the overspill from the Isle of Mull, although there are quite a number of nests on the mainland now.

The amount of eagles about reduces the quarry types dramatically. In this environment we find the most successful species are duck, woodcock, grouse and snipe. Our predominate favourite species to hunt with is the peregrine falcon. Flying a mix of falcons (females) and tiercels (males), we have a strong belief that you can't improve on thousands and thousands years of evolution. We also fly Goshawks, that due to the dramatic decrease in hare and rabbits here, are flown at ducks as well. 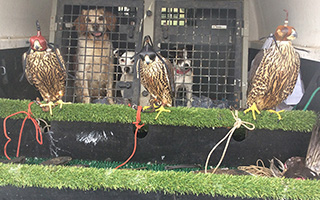 By flying these birds in tough conditions I am a stickler for making sure birds are able to fly in all conditions - high wind, rain, snow, and hail. It gives a real appreciation of the skills and abilities of wild birds of prey. For example The wind direction will it push the eagles down from the high ground, In Wet driving weather the birds move down the hill so they can hunt out of the clouds etc so the raptors follow.

Over the years we have had to rehabilitate wild birds passed into our care from the local area, and this is made easier by watching and learning the practice of how the wild birds interact with the falconry birds and vice versa. For example, ospreys will only feed from moving living water and pose no threat to falconry birds out weathering (sitting on a perch outside). They fully understand they are fish eaters, and give no alarm warning calls. In fact the ospreys hunt a pond for fish a couple of metres away from weathering birds. A truly incredible sight.

Joanne and her partner run Kintail Birds Of Prey, introducing the Scotland's incredible native birds of prey to their guests.