A Tale Of Two Tiercels 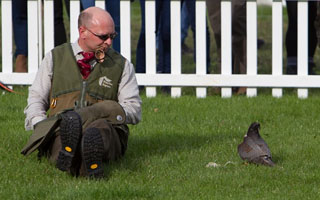 I like a challenge. I don't like life too easy, it gets dull. So I decided to try and get a pair of tiercels to fly as a cast for displays. It all started when my display lanner falcon died a few years ago. He was replaced by a seven year old tiercel peregrine who had a reputation for being a show off. A tiercel is the term used by falconers to describe a male peregrine.

I found out that when he was younger, the tiercel had flown in a cast and that sparked my competitive side. But I was too busy at that point as I alrady had a number of flying displays booked, and I had to keep Mason (a peregrine - so he's Peri Mason) fit and get used to his own particular style. He was so much quicker and much more agile than my lanner falcon, and seemed to relish on catching me out. It was all part of the fun! My wife Lesley often comments that strange cackles and woops emanate from me while I fly Mason.

At the start of 2016 I decided that this was the year to get my cast of tiercels and see if it was possible to fly them together. I spoke to lots of people who'd flown casts of various species in the past. I asked lots of questions and listened to their advice. The common theme was to get youngsters and start them together. I wasn't going to part with Mason - he's a star and I couldn't really justify two more birds. So I got another juvenile tiercel from a friend and thought it was worth a try. The first stage of training was as normal as it would be for any falcon. I got him respondng to the lure, flying and built up his fitness. I also made sure that both birds saw each other daily on the lawn and also were fed together.

Once he was competent flying solo, I got Lesley to hold him on the fist while I flew Mason free. The youngster, now sporting the name Matthew (Matthew Peri), seemed quite interested in Mason and his flight, while Mason didn't even acknowledge the presence of another bird. I felt that Matthew was watching and learning some new moves from Mason as any juvenile would from a parent. We repeated this process a couple of times and felt that the time was right to try them together. 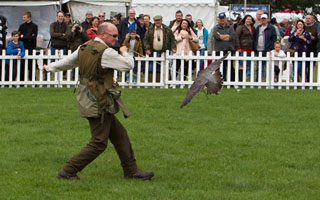 Then the big day came. We had planned and covered every eventuality and scenario we could think of, and practised our respective parts. Both Lesley and I were clear on who would do what if the worst happened. We had a lure each, a phone each and a camera.

We brought both boys out hooded, and sat them each on a separate training perch. We struck the braces on our respective hoods on the count of three. We paused. Then in unison on three, we removed the hoods. We held our breathe as we released the flying jesses and walked backwards a short distance and then waited. And waited... Both birds looked round, saw each other and sat there. Nothing. Phew!

After a few minutes I decided that this wasn't going badly, and that both birds were relaxed. So I got out my lure and started to swing. Matthew - young and eager of the two, took off and made a couple of passes. Mason sat there and lifted one leg. Another couple of passes and Mason started to rouse. It felt like he was planning to let the youngster do all the hard work, tire me out then come in and get the glory! Finally, Mason flew. He came quickly into the lure on a counter trajectory to Matthew. I had two boys stooping from alternate sides in quick succession. Amazing! Hard work! And the adrenaline levels soared as high as Matthew! It was quickly time to bring them in. Which presented the next challenge.

Timing was critical. Lesley was on stand-by with a second lure. I was watching both birds, trying to get the best flight path for one getting the lure while the other was far enough away to ring up before getting the second lure. Now all this was happening in a heartbeat - as I tried to watch both birds, swing a lure, communicate my intentions to Lesley and smile for the camera! Who says men can't multi-task! Then the perfect pass happened. "HO!" I called, signalling to the birds that it was time to catch the lure. In came Matthew who whacked the lure and landed, puffing. A second later "HO!" Lesley threw out the second lure and brought in Mason. Both birds sat on the lure and ate, happy and confident in each others company. 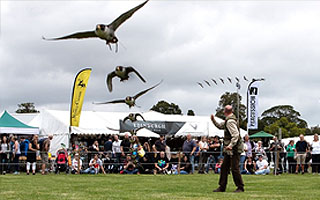 Well we'd done it! We'd survived. The birds survived. I hadn't wrapped the lure round my neck while they stooped me. Excellent. Lesley said that I was grinning like a village idiot, and had switched to "smug mode", but I didn't care. I had done what I set out to do. Now just to perfect the whole thing for public viewings so that others could witness their incredible flying too.

We repeated the whole process the next day and the same story unfolded. Matthew, ever keen decided to take off first. Mason bided his time. Once he got going, both boys worked me and my lure skills even more and the number of passes increased to around 15 each. The next day we moved to a different flying ground - just to keep the boys on their toes - but if anything this worked to their advantage.

The lift was better, the climbs they put in were higher and the stoops faster. I admit to 'wearing' the lure a couple of times on this flight! It also felt like to birds were communicating and 'pushing' me, rather than the other way round. But we got more passes and the boys flew in new patterns. No longer just flying from opposite sides, now sometimes they would mix it up and fly side by side straight at me. Another tactic was that Mason would range out a bit while Matthew did a few passes. I was so fixed on Matthew that I missed Mason coming at me, sun behind him, until Lesley stopped laughing long enough to warn me. The hardest ploy for me to cope with was when the both climbed vertically, barrel rolled and plummeted in perfect synchronisation over my head and passed like the Red Arrows.

Since these first few flights, we have flown the boys in a number of venues and always find that they improve with each effort. The fitness in both birds is far greater than when they flew alone, and they seem to enjoy each other. So far the finish has been uneventful. One session Matthew decided to try and take Mason's lure, but that was safely resolved as soon as Lesley offered the second lure to him.

If I'd thought that this would have worked so well I would have done it years ago. Maybe I am just lucky that Mason is a chilled bird and that Matthew is young enough to learn from the adult. Maybe it will all go pear shaped next year. But I have to say that it's hard work flying a fit tiercel. Its more than twice the work flying two. But it's one hell of an adrenaline rush and produces some great results seeing them fly together.

A falconer of many years, George runs Rhuallan Raptors. Falconry began as a hobby, that has now grown into a way of life. George flys his birds for the joy of doing it and wants to connect people of all ages with his falconry passion.