The Beginning, An End And A Fresh Start 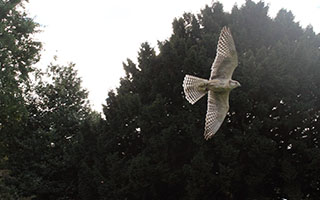 I had always had an interest in birds of prey. Growing up we used to make an annual pilgrimage to Screech Owl Sanctuary in Cornwall while on our family holidays. We sponsored a wild rescue tawny owl called Arnold who was blind and couldn't be released back to the wild. When we visited, the staff used to take us behind the scenes to see him as he wasn't used on display. On our many visits the possibility that I would ever be involved with birds never crossed my mind. I was a quiet soul, shy as they come. I wouldn't say boo to a goose, never mind a raptor!

Fast forward many more years than I care to admit, I found myself walking through some local gardens with some friends and we came upon a bird of prey display. We got chatting to one of the staff who mentioned that they take on volunteers. They gave me a card and that night when I got back home I sent off an email asking if I could be considered for a volunteer position. The reply soon came back that I was welcome to go along and so, a few days later, I found myself learning the falconer's knot and practicing handling the birds on display. I was so happy and loved working with the birds.

As time went on my fascination grew. I started reading some books, did a little course on raptor care and my knowledge began to grow. I knew at some point I wanted my own bird to fly. It then came to my attention that one of the falcons owned by the company, a peregrine x saker, the first falcon I flew, was going to be sold. I spoke to the company owner and asked if he would be willing to sell her to me. He said he would - and that he would help me with her and be my mentor - so off I went looking for land, somewhere to build my mews and ordered the equipment I would need. A month or so later I turned up to volunteer on display and was informed by my mentor that he had changed his mind, and that the falcon was no longer for sale. My heart broke. I'd been planning things, found land, ordered equipment and suddenly there was no bird. I decided not to give up and went looking for another bird to buy. 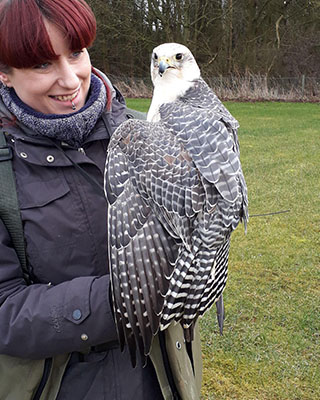 I remember the first time I saw her photo; she was like nothing I had ever seen. A gyr x aplomado falcon. She was stunning. She was a lurebound bird and had never been entered (which means she would free fly to the lure but had not been hunted with). This was just what I wanted for a bird to fly as part of the display I volunteered with. I sent her information to my mentor who said she looked good, so I was on the phone to her current owner ASAP and the sale was agreed. We made arrangements for her to be picked up. I remember the first time I held her on my glove, she was the most stunning creature I had ever seen. I named her Eira, for the gyrfalcon in her (Eira is Welsh for ‘snow’).

Now at this point I realise it all sounds wonderful; I had some experience, someone offering to help me and I had a beautiful bird. Unfortunately, all was not as it seemed. As I had been learning more off my own back I started to pick up on things going on in the display company that didn't sit right with me. Foolishly I brushed any doubts aside and just thought I had maybe not understood what I had read - after all, my mentor had far more experience than I did. But as time went on and I learnt more, especially after getting Eira, I found myself really starting to question the way things were done (or not done in some cases).

The problem I had, though, was that the company and the chap running it were the only sources of help that I had at the time. I didn't know about the wider falconry community as my mentor wasn't involved in it. I felt stuck. If I wanted to be able to continue looking after my bird I had to stay, even though I was now relying more on my own research and learning, rather than asking my mentor (some things had happened which made me seriously question his knowledge). 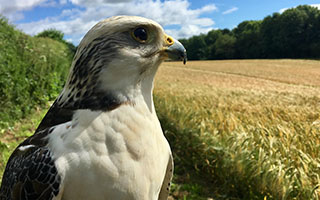 It makes me ashamed to say all this now, but I stuck around despite finding myself not agreeing with a lot of what was going on. If I would have only had the courage to post on a forum or on Facebook asking for help I may have gotten out sooner, but I was, much to my shame, scared off when reading responses to other people asking the kind of questions I wanted to ask.

In hindsight, I completely understand why other falconers get angry when someone who already has a bird starts asking basic questions - it comes from a good place, they care about the welfare of the bird, but at the time I just felt intimidated and like no one would be willing to help. So I carried on volunteering with the display. 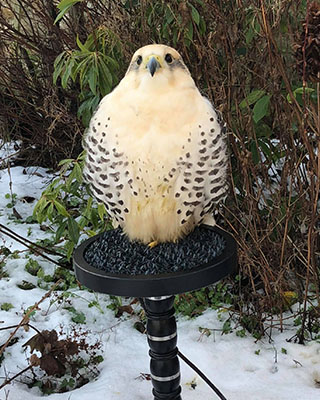 Then one day when I got my new bird certificate from the Independent Bird Register, inside the envelope I found a leaflet inside for the Female Falconers Club. I didn't think I'd be accepted (I always assume the worst), but I bit the bullet and applied to join. A few days later I got an email confirming my application had been accepted and I became a member. Little did I know this would change my falconry journey so much, and for the better. I started to make contact with other members, joined the club's Facebook group and suddenly I had a little network of other ladies I could ask advice of.

In September 2018 I attended the Womens' Falconry Weekend and that was the turning point. I met all of these other falconers, all with different kinds of experience whether it was hunting, flying in a display or private keepers who flew a bird just for the sheer joy they bring. It opened up a whole new side of falconry that I hadn't seen; everyone was so supportive, asking for advice and offering it. It was wonderful. I left my volunteer position of four years just a couple of days after getting home and never looked back.

Over the next few months I built up a network of people to ask advice of. I started a new volunteer role at the National Centre for Birds of Prey, continued my learning and just enjoyed being able to provide and care for my beautiful Eira bird. She was a joy to train and fly, even with the mistakes I made she was very forgiving. She was my world. I moved and changed jobs to enable me to best care for her, my social life was non-existent and my husband was lucky if he got to spend more than a couple of hours with me. Every decision I made, she was my first consideration. All the steps I had taken were to try and help me do the best I could for her. She was worth it all.

On the 18th September 2019 Eira passed away. She had flown on her training session, and eaten her food as normal. I put her in her weathering area and left her to have a sit out. I checked on her part way through the afternoon - she had been in her bath and was sat drying off on her perch as usual (she was a keen bather). I went to check on her a little bit later and she was slumped forward on her perch, gasping for air. I was straight on the phone to her vet letting them know I would be on my way as it was an emergency. I can't have been on the phone for more than a few minutes, but when I went to go and put her in her travel box she had already gone, she was lying on the floor of her weathering. She had passed away while I was on the phone.

The post mortem results later that evening showed she had suffered massive heart failure, and there was nothing I could have done. I'm not ashamed to say that when I got home that night I curled up into a ball and sobbed. The silence from her mews the next morning was deafening.

A warning for anyone thinking of taking up falconry or getting a bird to fly; they will steal your heart and then they will break it. They consume your life and when they leave you are left feeling lost and empty. You put so much of yourself into them that when they go a part of you goes with them. She was my first bird, I loved her and I will miss her every day. 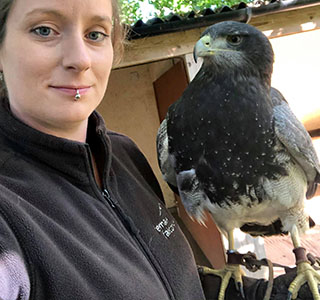 And so currently I find myself without a bird. But Eira's death, though an end, isn't the end of my falconry journey. She was a beautiful beginning. She taught me so much and I will use what I learnt from her to make sure I am in a much better position before getting my next bird. There will defiantely be another bird. I can't not have a bird in my life. They get under your skin and take over.

I have decided that I want to get a hunting with a bird, and although I have 5 years experience working with birds and for 2 and a half of those years I had my own bird, hunting is a completely different practice to display work. I am having to go back to basics and learn how to train a bird to hunt so I am currently searching for a mentor. I am also starting to look for large permissions, learning field craft and arranging to go out with other falconers during the the coming season to get an idea of how different birds hunt. There will be a lot of different things to consider before deciding on what bird I will eventually get. It is going to take me a while to be in a position to do so, but I am looking forward to the new challenges it will bring.

I didn't have an ideal introduction to falconry, in fact I ended up with a bird before I was really ready, and not just any bird, an unusual hybrid falcon. Looking back, I would do things differently if I could, but I will never ever regret having her. I am grateful for the joy she brought me and that she did eventually lead me to find the right path. I can't thank those who have supported me enough, throughout my journey so far, and I am eternally grateful for the help and advice offered by those willing to give it.

If I can offer any advice to those looking to start out in falconry then it would be the following:

Amy is reletively new to falconry but as well as flying her own hawk, she volunteers weekly at a bird of prey centre, and is active within the Female Falconers Club. She has huge drive to learn and develop in all aspects of falconry.