Falconry in Rehab - A Success Story! 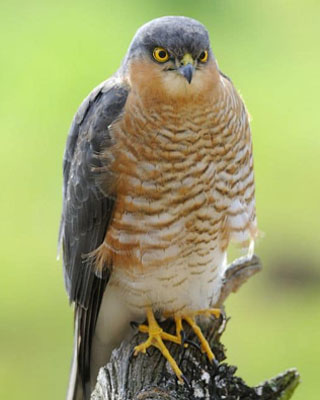 Rehabilitation of wild raptors has many facets, challenges and rewards. Recently I’ve had the chance to look back through all my records. Thinking about Sparrowhawks in particular, it tallies I've dealt with 439 in 17 years.

They were mainly birds that have collided with windows or greenhouses, gotten stuck in warehouses and ultimately ended up ill or injured if not released quick enough and with the wrong type of assistance! Car accidents too. I’ve also dealt with hawks affected by shootings, poisoning, trapping injuries and even the odd random daft situation you couldn’t predict!

They are one of the most challenging birds to rehabilitate which require a lot of difficult judgement on treating something versus stress reduction. Getting them to feed is often a massive hurdle. Really understanding the individual bird’s needs, body language, and behaviour, and balancing that with their health needs is a constant battle which having falconry skills helps with hugely. I find this is particularly the case with Sparrowhawks, often more than with a lot of other species.

One particular case always illustrates this to me. In my eyes it always helps me fight the battle that falconry skills help rehabilitation cross the void over into true conservation. 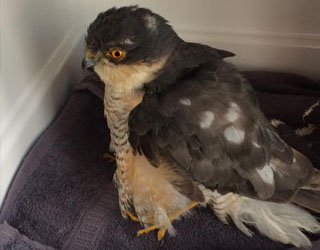 Fixing birds up and getting them back is one thing. Checking they can hunt successfully as adults is another. But having to teach young birds how to be birds and hunt, and yet not imprint them in the process, is combining true rehab and falconry. It simply can’t be done without the falconry aspect.

One musket I received had lost both parents to poisoning and his clutch mates already. Injuries and illnesses sustained in the human ‘help’ it had received being recovered, and in its initial help by someone else trying to help before it got to me was not a great starting point. At only a tiny dot of a bird, he was in a bad way.

He needed rehabilitating along the way with medicating, fluids, feeds, splints, and all sorts. So that ruled out finding a foster nest for him. The bird was going to have to be hand reared but without imprinting. 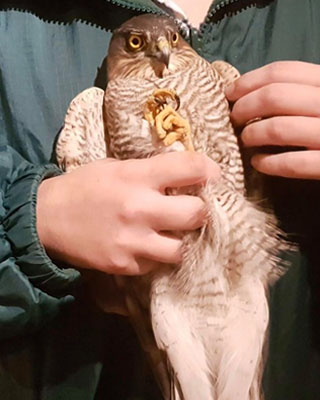 By the time it would be healed and well enough, it would not be safe to put him into a foster nest for his sake or any other youngsters in the nest. So the long road began! When I say long road, I have only ever found three birds in 17 years I have kept in care for treatment for longer than five months - in terms of success rate and welfare. But this bird was going to need a full falconry hack to give it chance of wild survival again. We were in it for the long haul!

The bird was cared for and treated. He was never fed from my hand during rearing, and never saw me provide food. He was tube fed as needed, or the food was provided from behind curtains with covered hands and specialist tweezers.

Once well enough, gentle manning and training began, then the full falconry training process continued. We carried on the whole way through until he was hunting. Care had to be taken to find ground near enough to where he came from for rehab best practice reasons, but also to protect him from what happened to his parents, checking for other territorial Sparrowhawks in the area, and so on.

Hunting skills and fitness developed. His co-operation with me wasn’t as strong as most would be, but at every stage it was done at the earliest opportunity - as I didn’t want a full proof bond. He was wild and going back to the wild as soon as possible. So (and not always unusual for Sparrowhawks anyway) there was plenty of telemetry fun in the early days whilst he wasn’t fully able to support himself. Gradually he became more independent and then I trained him to need no equipment at all, but to return to the glove and then into the travel box. He had no jesses and no telemetry fitted anymore.

We were now ready for hacking time on site. The time got longer and longer between being called in at the same time each day, by being taken to the site earlier and earlier, so he was out for longer. It began to get harder to convince him to come in. He would always come over checking me out but not to land on the glove or to collect food. He would just follow on as I walked, or circle overhead so I wouldn’t ask anything of him, just be there if needed. 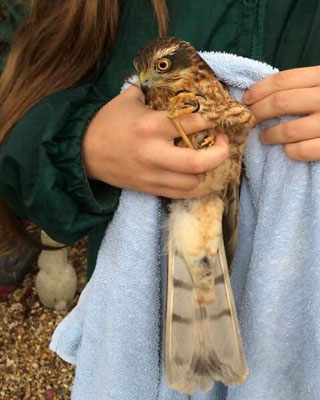 I knew we were there. The first winter came and I checked on him every other day and then just on the bad weather days if he needed some ‘pick me up’ food! But it was very rarely needed. Spring rolled round and a female appeared with him now. All the signs were positive! I knew it was time to completely take my leave. As much as I was no longer interfering at all, just enjoying watching him, now was time to go.

There are many incredible wildlife centres out there, but they cannot possibly manage to provide birds like Sparrowhawks with a replacement parent experience - learning to hunt and getting that level of fitness and experience of social wild learning, that can be successfully utilised with falconry skills.

Some species do ‘okay’, and even better being nest box hacked or aviary hacked, but others simply don’t. Red Kites, for example, can be reintroduced from hack aviaries but with other species it would not be so successful.

As unlikely as it seems with the current health of the population, if Sparrowhawks ever needed reintroducing they would need falconry hacking and our skills would desperately be needed to give these birds a chance.

Many rehabbers that are also falconers use their falconry skills, to smaller or larger amounts, with many birds to support and improve their care, and the success release rates.

Falconry, conservation and rehabilitation can work hand in hand.
They are essential to each other. I know there is a future with falconry...

Claire has been a rehabilitator for 17 years individually, and as a trustee and committee member of a charity for 9 years which also included education work. She has previously worked at zoos and for a falconry breeder, as well as having her own birds as well. She has spent time studying and learning under many vets along the way, and also friends from falconry communities from other countries.